Always on Tony’s mind is the death of his brother Mick who took his own life in 2005. This devastating loss motivated Tony to become a Beyond Blue National Ambassador.

Volunteering with Beyond Blue (an initiative of former Victorian Premier Jeff Kennett), he successfully lobbied and encouraged the establishment of the Beyond Blue Cup. It’s a match played between the Geelong and Hawthorn Football clubs as a vehicle for using an AFL match to increase awareness and reduce the stigma associated with talking about mental health issues.

As a Beyond Blue National Ambassador, Tony regularly gives talks around the country where he gives tried and true pointers on turning depression on its side, building self-esteem by discovering the joys of becoming a giver, an adventurer and passionate volunteer.

The Beyond Blue Round is permanently in the AFL fixture and is observed, not only at the top tier but local leagues too. 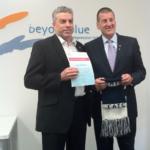 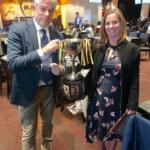 Need a speaker or an MC? Need a presenter or a motivator for an event? Or simple need help and guidance on making the most of your organisation's team and culture
Get In Touch